StarForge (also known as SF) is the first game developed by CodeHatch. [1] Early in it's development an IndieGoGo campaign was run to raise funds. It is presently available for early access on Steam. There is a set of Steam Trading Cards available for the game. The game is built on the Unity engine. It was a finalist in the 2013 Independent Games Festivals award for technical excellence. [2]

StarForge is a game about gathering resources, building bases, crafting anything you want, and surviving on an alien planet. Earth's star is dying and humanity transferred as much technology and resources as possible and left on a one way mission to populate another planet. StarForge was inspired by Halo, Warcraft 3, Borderlands, Terraria, and Minecraft. It borrows elements from the RTS, FPS, RPG, Voxel Builder, Tower Defense, and Physics Sandbox genres.

Not all the below features are in the current version of the game, they will be added in future patches. (List of unreleased features)

Includes only the base game and access to the Alpha and Beta.

The Digital Deluxe Edition includes Alpha, Beta and Full Game access, as well as the following:

Get Two Copies of the Game. Get Alpha, Beta, and Full Game access for both your copy and a gift copy you can give to a friend. Each copy has full Founders Club Perks.

The player takes the role of a colonist stuck on the alien world, Atlas. 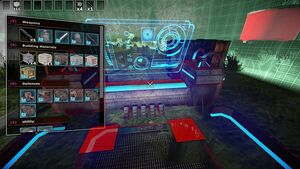